As was discussed in a previous Daydreaming in Paradise article, Brexit is one of the most pressing political, economic, and social issues facing the United Kingdom currently. And in an age of globalization, where anything that happens to a single country has an effect on other countries, the impacts of Brexit are far-reaching. In fact, Allianz Chief Economic Adviser Mohamed El-Erian has noted that Brexit is already changing the ways countries are choosing to structure their economies.

While most of the impacts will be felt by the UK itself, other nations are bracing themselves for what will happen once the UK’s exit from the European Union is finalized. And as governments hash out macroeconomic policies and treaties, the consequences of these decisions hit hardest at the bottom.

One of the biggest points of contention that drove discussions leading up to the 2016 referendum was the issue of immigration. According to Lord Ashcroft Polls, one-third (33%) of ‘Leave’ voters considered “[Britain regaining] control over immigration and its own borders” to be the reason for leaving the EU, second only to “the principle that decisions about the UK should be taken in the UK.”

With the free movement policy under the European Union, people with member states passports or Schengen visas are free to travel in and among all the EU member countries. Post-Brexit, policy makers are anticipating definite changes to immigration guidelines in the United Kingdom. While the specifics of those plans are still under review, changes are already taking place. Business Insider reports that UK visas with a validity of six months have already increased in cost for non-EU migrants, after the Immigration Health Surcharge doubled from GBP 200 to GBP 400 in 2019.

OFWs and Brexit: The Early Days

Perhaps the main concern of Filipinos when it comes to Brexit is the impact an exit from the European Union could have on the Filipinos living and working in the UK. London Mayor Sadiq Khan has criticized Theresa May’s proposal on immigration policy post-Brexit, stating that the policy was disappointing in both content and tone. With concerns over the proposed new rules rising left and right, it’s not unreasonable for many OFWs to be worried about their status in the UK in the future.

The Department of Foreign Affairs’ 2014 report on Filipinos living and working overseas has the UK at 11th place with over 200,000 Filipinos, a close second to 10th place Singapore. With such a large Filipino population, the majority of which is concentrated in London, any changes to immigration and foreign worker policy can cause ripple effects.

In the months following the referendum, Brexit had a direct impact on Overseas Filipino Workers due to the depreciation of the pound sterling, as GMA News writes in this article. With the drop in valuation— a reported Php 7 from the start of June 2016 to July 2016— many OFWs were forced to take on more hours in order to counterbalance the effect the devaluation would have on their remittances.

British Ambassador Asif Ahmad was quick to reassure Filipinos that Brexit would have a minimal impact on OFWs, as Filipinos were employed in “essential” parts of the workforce, such as seafaring and nursing. According to former Consul General of the Philippine Embassy in the UK Mario Lopez de Leon, Jr., the de-prioritization of EU migrants might in fact make housing and other social services more accessible to non-EU migrants, including Filipinos.

One of the top industries linking OFWs to the United Kingdom is nursing, and it’s no wonder that the impact of Brexit is so closely tied with the population of Filipino nurses working in the UK. Given the aging population and staff and budget shortages, the National Health Service in the United Kingdom has been making a concentrated push to recruit more nurses in recent decades.

In previous years, these recruitment pushes have led to a slow but steady increase in nurses in the UK, but concerns over Brexit have infiltrated even the NHS. The Independent states that 10% of the European nursing workforce quit in 2017 over concerns over Brexit, bringing the staff deficit to well over 40,000. Lack of funding and reduced bursaries have also played a part in discouraging new nurses. And with many UK nurses and midwives retiring, staff shortage woes only seem to be increasing.

However, one man’s loss is another man’s gain, and while the number of EU nurses may be decreasing, that opens more opportunities for non-EU nurses to be recruited. Dr. Nicola Gillin found that while the direct effects of Brexit on the Filipino nurse population in the UK may still be unclear, there is the potential for more doors to be opened for nurses outside of the EU.

These predictions seem to be coming true, as the NHS seems to have upped its recruitment of non-EU nurses in the years following Brexit. According to reporting by the Telegraph in 2017, the NHS made a bid to recruit over 5500 nurses from both India and the Philippines. In 2018, the Department of Health in Northern Ireland had plans to recruit over 600 Filipino nurses in order to address their own nursing shortage, which at the time was 10% below capacity.

Thus, while Brexit did have negative short-term effects on OFWs working in the UK, the need for skilled workers trumps all. Given stricter measures on immigration from within the EU, it’s quite likely that the number of positions for Filipino workers may actually increase. However, as recent years have shown, anything can happen, and the Philippines would do well to wait for the dust to settle before counting Brexit a success.

For more articles on what’s currently relevant around the world, check out our Politics category on Daydreaming in Paradise.

COVID-19 and Transportation in the Philippines 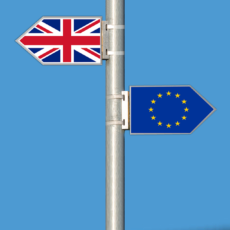 How Will Brexit Affect the Philippines?